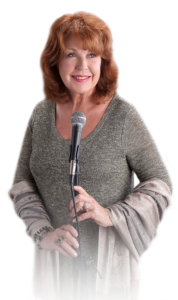 CYNTHIA HART
Inspired by her driving desire to convey positive and uplifting messages beyond genre, culture or dogma, Cynthia Hart celebrates our common humanity through music. The critically-acclaimed songstress has devoted her unique vocal gifts to bringing people together with her timely and broadly accessible message of oneness. Consistently, Cynthia’s latest album, I Love My Life, is a melodious reminder that, despite superficial differences, we are all united in our common search for the divine.

The ten-song compilation seamlessly blends genres to produce a compelling offering aimed at a diversity of listeners from the concert hall to the Sunday pew. While its upbeat title-track promotes acceptance and forgiveness, I Love My Life includes such mesmerizing ballads for self-realization as And So It Is along with the feel-good Let Your Heart Shine. All of the inspired album’s songs incorporate positive, universal messages of spiritual growth, compassion and communal uplift. I Love My Life is the third and most recent musical gem from a talented vocalist who has devoted herself to encouraging and bridging our divinely-inspired human journeys.

Cynthia made her mark in the music business as the lead singer/songwriter in the Southern pop-rock band Dreamer that toured 300-days-a-year for 15 years. The band shared stages all over the country during the heyday of acts such as The Allman Brothers, Lynyrd Skynyrd, Aerosmith, Atlanta Rhythm Section, The James Gang, Steve Miller, ZZ Top, Bob Seger, Kansas, The Out laws, Marshal L. Tucker Band, Savoy Brown, James Taylor, The Byrds and Tina Turner. Dreamer played all original music and the band released two singles, “Fantasy Man” and “Be My Man” which went on to receive solid airplay throughout the Southeast part of the United States. Cynthia recalls fond memories of touring and sharing the stage with many Rock ‘n’ Roll greats. “I remember playing at a Concert club called Hotlanta, alongside an amazing unknown band from Jacksonville called Lynyrd Skyard. The first time I heard the sound of Ronnie Van Zant with his three guitarists and two drummers, I just knew they were something special! They rocked the place that night!”

Cynthia’s love for nature developed as she grew up on a family farm out in the country, 12 miles from Dublin, Georgia. A rare glimpse into her musical gift was revealed to her family very early on, when she sang before she could speak “The first recorded music I heard was a Hank Williams record that my grandfather played, and I asked him to play it over and over again,” she recalls. An abundance of Cynthia’s early childhood was spent constantly performing at home for her family. At 10 years old, her childhood dream of becoming a performer took flight when she began singing solos in her local Baptist church. She began passionately studying piano and voice at 12 years old and her high schools years were spent performing in numerous musical stage productions. Cynthia was awarded a well-deserved scholarship to West Georgia University to study voice and piano, which led to accomplishments such as performing with Atlanta’s top vocal group called “The Robert Shaw Chorale,” becoming a featured soloist for the Atlanta Symphony Orchestra and performing at hundreds of weddings and funerals.

Hart’s career as a professional singer developed as she spent four years singing with various groups, covering songs by the folk-pop acts of that time such as, The Mamas and Papas, Peter Paul & Mary, Judy Collins and Joan Baez. This marked the beginning of her decade-long stint as the lead singer and founding member of Dreamer, one of the top acts from the Atlanta area during the explosion of southern rock scene in the 1980’s and early ‘90s.

After over a decade of being completely immersed in the music business, Cynthia ended her career and began soul searching, shifting her energy towards a profound exploration into spiritual and personal growth. A turning point in her life was the discovery of metaphysics, which illuminated her newfound path towards self-inquiry and emotional healing through intuitive guidance. A heightened awareness stirred her soul as she dove deep into parapsychology, astrology, and spirituality. She describes, “During a sabbatical in the Caribbean I was guided and inspired to write new music celebrating the absolute power to heal ourselves through unconditional love and reconnecting with nature and our intuition.”